It’s about that time of year when New Year’s resolutions start to fade away for many people. In my experience, a weight loss goal is usually the first to go by the wayside and perhaps a close second might be the full-on pursuit of a job or career change. The new year is full of hope and promise and when you’re relaxing over the holidays in December it seems easy to say, “I’m going to make a change in my work situation when January rolls around”. Well, January came and went, we’re squarely into February and you haven’t pursued that change. What do you think is holding you back? I have a few thoughts on this so please read on.

You’re not inspired by the job that you have but you don’t know what you want.

So many aspects of our lives are plotted and planned. Often, though, our careers seem to take on a life of their own (good or bad) and before we know it, we’ve spent many years in a job or company or industry without really stopping to think “Do I even like what I’m doing? Is this the work I was meant to do?” For those reading this that have asked those questions, I would guess there is something gnawing at you that indicates it’s time to start doing some soul searching. I had that experience about 18 months ago. I was no longer fulfilled in the work I was doing. I knew there was a life that I wanted to create for myself that included a focus on work that truly meant something to me, where I could get lost in that work and feel energized because of that focus I was giving to what I loved and, most importantly, making a profound impact on the happiness and fulfillment in the lives of others who sought my help. I knew I wanted variety and more of a non-traditional work situation. What I didn’t know, however, was the best way to find this new way of working. That’s when a close friend who is also a former colleague and now an inspiring coach, encouraged me to spend some time getting very clear on what that new life and work looked like for me. I did just that and it became my roadmap and showed me the “real me”. I saw themes and patterns emerging and I knew I had to forge my path ahead. This is how I went about it.

I started brainstorming and writing down how I wanted to spend my time and my energy in my work life. This exercise became a list of not only what I wanted to do at work, but how I wanted to feel. I was essentially outlining my vision of what career happiness looked like to me. I found that so many empowering words were in my statements like creativity, rewarding, freedom, energized, motivated, inspiring, interacting, engaging. This became what I titled “My Dream Job”. I took that list that I had been composing in a journal and had a graphic designer make it look pretty and hung it in my home office with the date of July 2016 which was when I finalized this wish list. I wanted that date included so I would always remember that this was my starting point of a new and exciting beginning.

I found that once I unlocked what was inside of me, there was no way it was going back into the recesses of my mind. I knew it was time to act. After all, I dug deep and was able to finally articulate the road I wanted to walk. It was the clearest I’d been on anything in my career up to that point. I wasn’t going to ignore what was revealed. I was now at a point where I could make some concrete plans on how to form this future that I could see was within my reach. I started sharing my goals and plans with people. I took a pulse check from people I talked to see if my plans to move into Career Coaching resonated with them. Could they envision me doing this work? The answer was a resounding “Yes!” and that gave me some external validation that I was onto something. I started getting some clients through referrals and doing some business development on my own. Who knew I was a salesperson? The funny thing is, you learn so much about yourself and what you’re capable of doing when it’s in pursuit of something you believe in and something that you love. I eventually left my full-time corporate job which, if I’m completely honestly, was scary. No. It was terrifying. It was truly a leap of faith, but I just couldn’t ignore what I knew I had to pursue. Magically, it seemed, right after I made that big decision, I ended up getting the opportunity to develop partnerships with both an outplacement firm and a career coaching firm which provides me another source of job searching / career coaching clients. In addition, I was provided an opportunity to do some freelance recruiting for a few clients, in industries new to me, where I’ve been able to learn and grow in new ways. It’s strange. The fear that gripped me when I was considering making a change, seemed to give way to open doors once I said goodbye and put trust in my gut and my dreams.

The Real You Is in There Somewhere.

I encourage you to take some time and create your vision of career happiness. It may just spur on some forward movement to somewhere different than where you are today. For some, it may end up looking like a non-traditional job situation like I pursued. For others, it could be a traditional job. Whatever it is, it’s your dream job and the life that you want to create. Don’t let so much time pass by that you’ve never learned what fulfilling work looks like to you.  By doing this interior work, it could create the compass you’ve needed to guide you to that place you’ve been longing to go.

I’ve included “My Dream Job” declaration which hangs in my home office that became my guiding light. I’m happy to say, by staying true to this, I am truly doing the work that I was built to do and loving the life that I purposefully created for myself.

I wish the same for you. 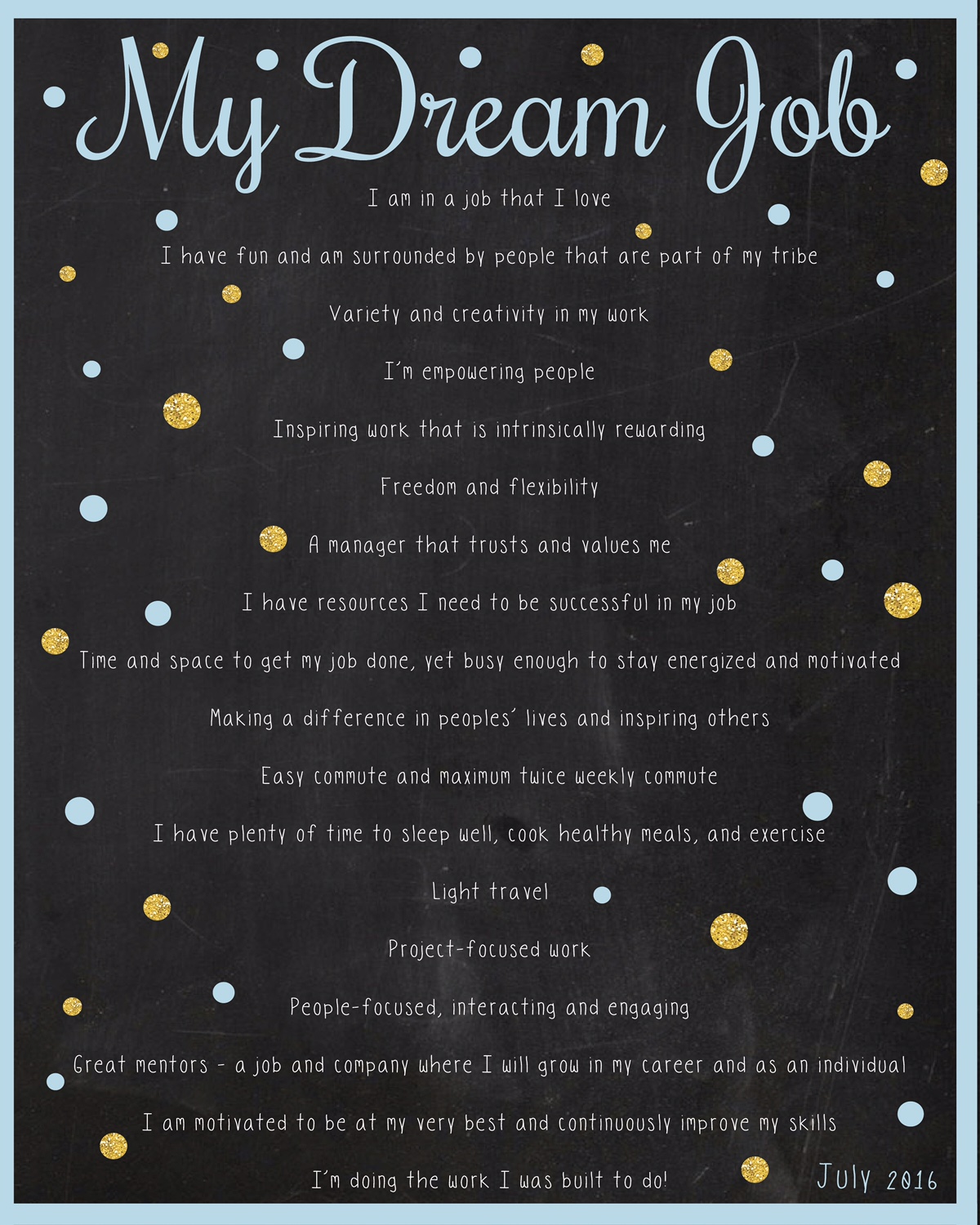